SOUNDSORY® is a Multisensory Homebased Program.
It is designed to be safe and effective and to help people with

The program consists of specially designed music processed with neuro-acoustic modifications as well as a series of movement-based exercises. The program is 30 minutes a day for 40 days.

How does the Soundsory® work?

A 5-minute exercises program follows the 25 minutes of music. The body is foundational for learning and doing these exercises right after the stimulation enhances the registration of information to support attentive and learning processes.

Enter the security code shown above

If in stock 3-5 Days Delivery

Feel the vibration
in your body

Help the brain to 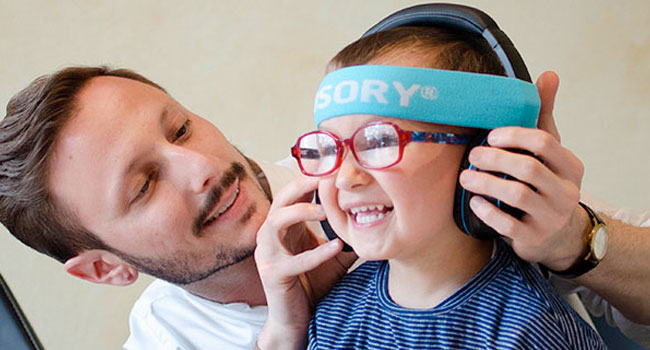 I have been using the Soundsory® for just over a year in my Occupational Therapy practice. I have found it simple to use as the program automatically moves to the next day’s music when the 30 minutes are completed. I actually completed the full program myself and found that l slept really well and felt really relaxed and content during the day.

I like that as well as the built-in music program, the head phones are also noise reduction headphones. I have used the Bluetooth feature to help children get used to wearing the headphones while listening to familiar music. This worked really well for a young boy who is autistic and nonverbal. He was able to keep the headphones on and once his own music finished, we switched to the Soundsory® music and he listened for the full 30 minutes. He then went on to do the whole program at home with no difficulty.

I have mainly used the Soundsory® with children and adults with autism, for children with auditory processing disorder, and children with difficulty with emotional regulation. Several parents have reported that their child is calmer and more relaxed. One 10-year old was very happy and singing lots after each 30 minutes of listening. His mother also said he had less emotional outbursts. One adult in her fifties reported that she found her emotions were more in control and she felt more relaxed both during the 40 days of listening and in the weeks following. 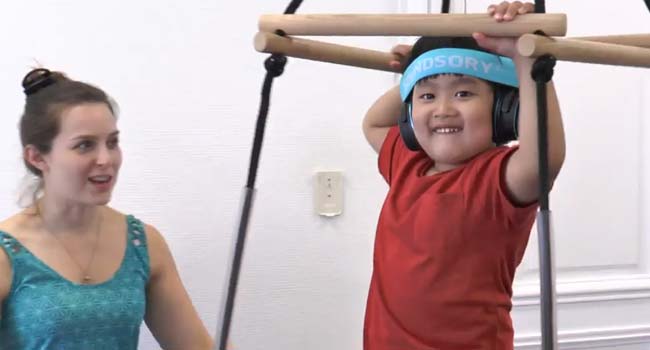 As a new Tomatis® practitioner and teacher, I want to help my small wonderful pupils to make progressive steps in adaptation to this life, soothing the obstacles on their way. They have the same problem – unavailability to communicate verbally – caused by different disorders. And my niece Anna is one of them. Her parents were the first whom I recommended the Soundsory® program.

She is 5,5 years old, born with a serious brain injury in the left hemisphere and as a result suffering from right-sided hemi paresis. She’s made a great progress after 2 Tomatis® and Forbrain® intensives but I understood she needed something more. I always remembered my trainer’s (Valerie Gas) words: “No body – no language”. I persuaded Anna’s mum to buy the Soundsory®. “One more set of headphones?” she asked with a slight fear in her voice, knowing how difficult it was to put something on her daughter’s head. We were so happy when Anna tried the Soundsory® headphones with no tears. To our surprise, within a few minutes, the girl stood up from her chair and began to dance in the headphones using both arms and legs. At this moment she is close to the middle of the Soundsory® program but every day we see changes in managing her body and improving her motor skills, attention and speech.

We liked the Soundsory® program very much because it is very easy to use. All the music is already set and recorded inside. It is wireless, so it does not restrict your mobility. And, of course, it’s really helpful for people suffering from autism spectrum disorders, auditory processing disorder and attention deficit hyperactivity disorder.

As for the second part of the Soundsory® program– body exercises – I would recommend parents to watch them in advance in order to show and do these exercises with children. If they are not capable to repeat you can manipulate their arms, legs etc. Very small kids can be interested in copying the exercises from puppets, teddy-bears, dolls or in role-playing games.

I have been using the Soundsory® for just over a year in my Occupational Therapy practice. I have found it simple to use as the program automatically moves to the next day’s music when the 30

As a new Tomatis® practitioner and teacher, I want to help my small wonderful pupils to make progressive steps in adaptation to this life, soothing the obstacles on their way. They have the 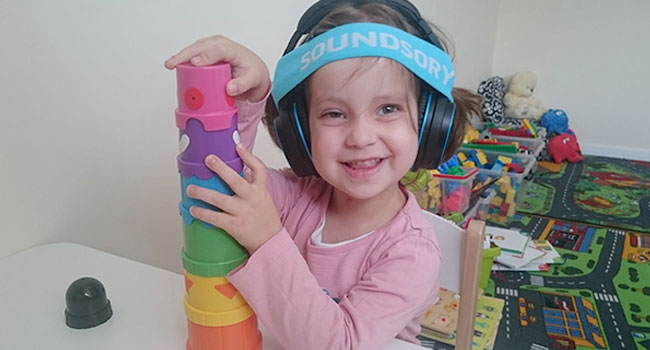 I am a speech therapist from Nur-Sultan (Astana), Kazakhstan working in a correction group. Our state-run kindergarten purchased SOUNDSORY® devices and we started using it with our

I am a speech therapist from Nur-Sultan (Astana), Kazakhstan working in a correction group. Our state-run kindergarten purchased SOUNDSORY® devices and we started using it with our students.

In our center, we work with children from a young age (3 to 6 years old), as well as with fairly mature teens. The main problem of our children was poor-quality speech and, accordingly, a number of systematic training was needed in an addition to speech therapy classes. In addition, the adaptation to society has provoked increased anxiety. The children engaged in games that were not too active or exhausting, while wearing the wireless headphones. Children drew, folded puzzles or played board games.

The children experienced no negative impressions or side effects, which were very good. We held classes every day for 30 minutes, 5 of the children were listening with pleasure gymnastics for the body, and already after the first days they were in a good mood and we were impressed.

Almost immediately, all personal development went uphill – they became more communicative with other children, and anxiety decreased noticeably. The quality of speech improved – the sounds became clearer, the correct pronunciation of difficult phonemes appeared, and complex sentences began to be made. Reading became meaningful, analysis of the read information appeared. The speed of reading also increased slightly and daily classes were a big support to this goal.

The program is sufficiently simple and at the same time very effective. It is suitable not only for kids with developmental delay or hyperactive children, but also for adults. Almost always the effect is positive and our children are no exception. I do recommend Soundsory with children! They have a very good influence on the psyche of a child.